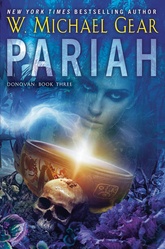 The third book in the thrilling Donovan series, a sci-fi action adventure set on a treacherous alien planet where corporate threats and dangerous creatures imperil the lives of the colonists.

Corporate assassin Tamarland Benteen's last hope is the ship Vixen. With a load of scientists aboard, Vixen is tasked with surveying the newly discovered planet called Donovan. Given that back in Solar System, Boardmember Radcek would have Benteen's brain dissected, he's particularly motivated to make his escape.

Meanwhile, back in Port Authority, Dan Wirth discovers that he's not the deadliest man on the planet. Tamarland Benteen is making his play for control of PA. And in the final struggle, if Benteen can't have it, he'll destroy it all.