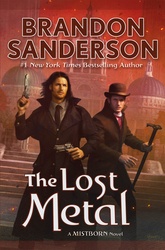 Return to bestseller Brandon Sanderson’s Mistborn world of Scadrial as its second era, which began with The Alloy of Law, comes to its earth-shattering conclusion in The Lost Metal.

For years, frontier lawman turned big-city senator Waxillium Ladrian has hunted the shadowy organization the Set. After Wax discovers a new type of explosive that can unleash unprecedented destruction and realizes that the Set must already have it, an immortal kandra serving Scadrial’s god, Harmony, reveals that the outer city of Bilming has fallen under the influence of another god: Trell, worshiped by the Set.

If no one steps forward to be the hero Scadrial needs, the planet and its millions of people will come to a sudden and calamitous ruin.