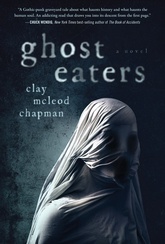 Open a door to the unknown

Erin hasn’t been able to set a single boundary with her charismatic but reckless college ex-boyfriend, Silas. When he asks her to bail him out of rehab, Erin knows she needs to cut him off. But days after he gets out, Silas turns up dead of an overdose and Erin’s world falls apart.

When she learns that Silas discovered a drug that allowed him to see the dead, she doesn’t believe it’s real but agrees to a pill-popping “séance” to ease her guilt and pain. When she steps back into the real world, she starts to see ghosts everywhere from her Southern hometown’s bloody and brutal past. Are the effects pharmacological or something more sinister? And will Erin be able to shut the Pandora’s box of horrors she has opened?