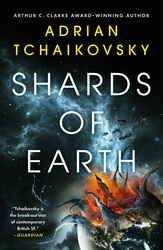 Our last hope could destroy us

After earth was destroyed, mankind created a fighting elite to save our species, enhanced humans such as Idris. In the silence of space they could communicate, mind-to-mind, with the enemy. Then one day, their alien aggressors, the Architects, simply disappeared. Idris and his kind became instantly obsolete.

Now, fifty years later, Idris has neither aged nor slept but his crew has discovered something strange abandoned in space. It's clearly the work of the Architects—but does this mean that they are returning? And if so, why? Hunted by gangsters, cults and governments, Idris and his companions race across the galaxy searching for answers. For they now possess something of incalculable value—something that many would kill to obtain.